Crafting the Asks for the First Time Donor

Your nonprofit may have built a large list of potential supporters — people who have shown interest in your organization but who have not yet been moved to give.

How do you bring this potential new supporter from interested to invested?

It’s all about crafting a solid and multifaceted “first ask.”

The Four Elements of a First Ask 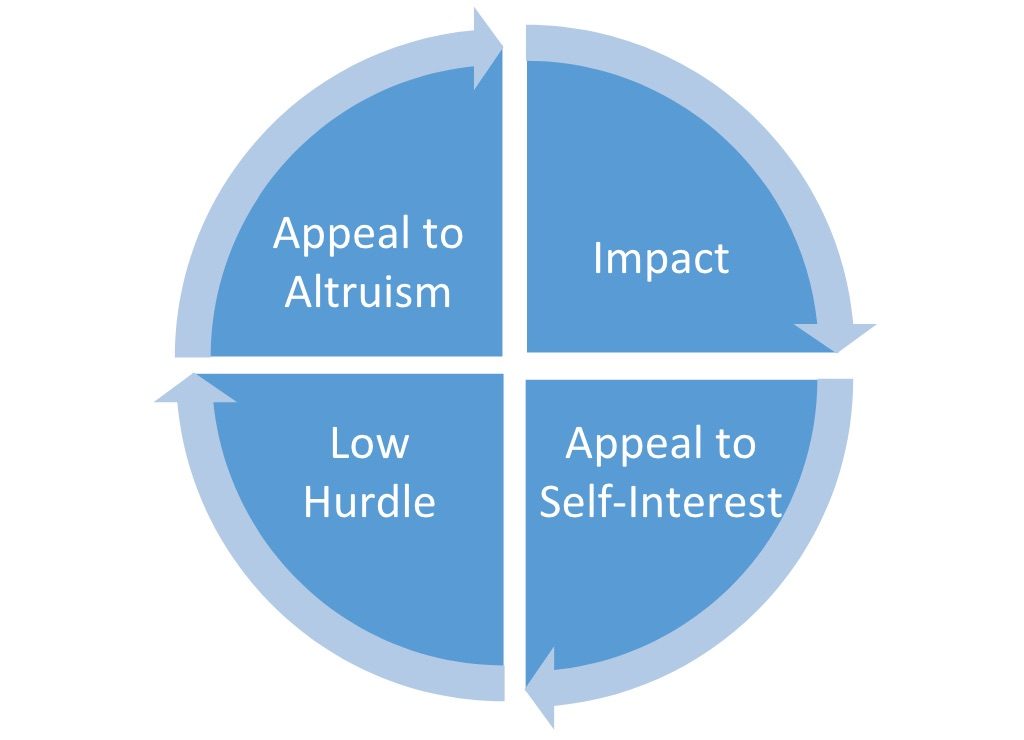 An “ask” is more than a general request for the donor to give — it’s an offer to satisfy specific donor desires in exchange for their support.

There are four basic elements to a first ask. The more of these you can build into your asks, the more you can offer your potential first-time donor.

Your potential donor wants to make the world a better place. A spirit of giving and activism is already within them — your job is to appeal to this spirit with your organization’s unique, impactful initiatives.

Time and time again, the campaign data shows that adding other elements to your first donation ask sharply increases the number of people who will give.

Free Video on Crafting The  Asks for the First Time Donor

Supporters want to see a cause-and-effect linkage between their gift and a charitable outcome.

Take the World Wildlife Federation, for example. WWF’s mission statement is “to stop the degradation of the planet’s natural environment and to build a future in which people live in harmony with nature, by: 1) conserving the world’s biological diversity; 2) ensuring that the use of renewable natural resources is sustainable; 3) promoting the reduction of pollution and wasteful consumption.

That’s a big, bold, altruistic appeal to making the world a better place. But for fundraising, WWF appeals address the imminent threats of extinction for specific species, like the panda, polar bear, and tiger.

This concept also applies to community nonprofits. Holiday food drives and homeless shelter appeals provide donors with a cause-and-effect linkage. Donate food, feed the hungry. Make a monetary donation, pay for someone to spend the night off the street.

Your donor craves an array of social benefits, including connectedness, social support, and social stature.

Yes, your potential donor wants to make the world a better place, but there are other, more personal factors that drive a person’s philanthropy. Your nonprofit’s next task is to appeal to a new supporter’s self-interest. These desires can be fulfilled with a t-shirt, a fancy mug, or a magazine subscription. These are the social benefits that include the need for connectedness or community standing.

A first ask that invites participation and engagement in organized runs, bike rides, golf outings, and other events provides a benefit of social connectedness. Showcasing donors on a website or celebrating their involvement across your social media channels provides community standing.

The appeals to altruism, impact, and self-interest should be factored into all your asks. A fourth element, the low hurdle, is especially important for new donor acquisition.

Giving is a two-part decision process. The first step is to decide to give; the second is how much to give.

Create a low hurdle by asking for a small donation. Five dollars is a much lower hurdle to clear than one of $50 or $100, inspiring many more people to decide to give.

The good news is that online transactions are driving down processing costs, so the low hurdle can be economical.

But here’s the trick: Once the decision to give has been made, you can ask for more — either as an “upsell” during the check-out process or in a follow-up appeal. Once you can get people to give, they are much more likely to give again.

Interested in getting help on crafting your next appeal?